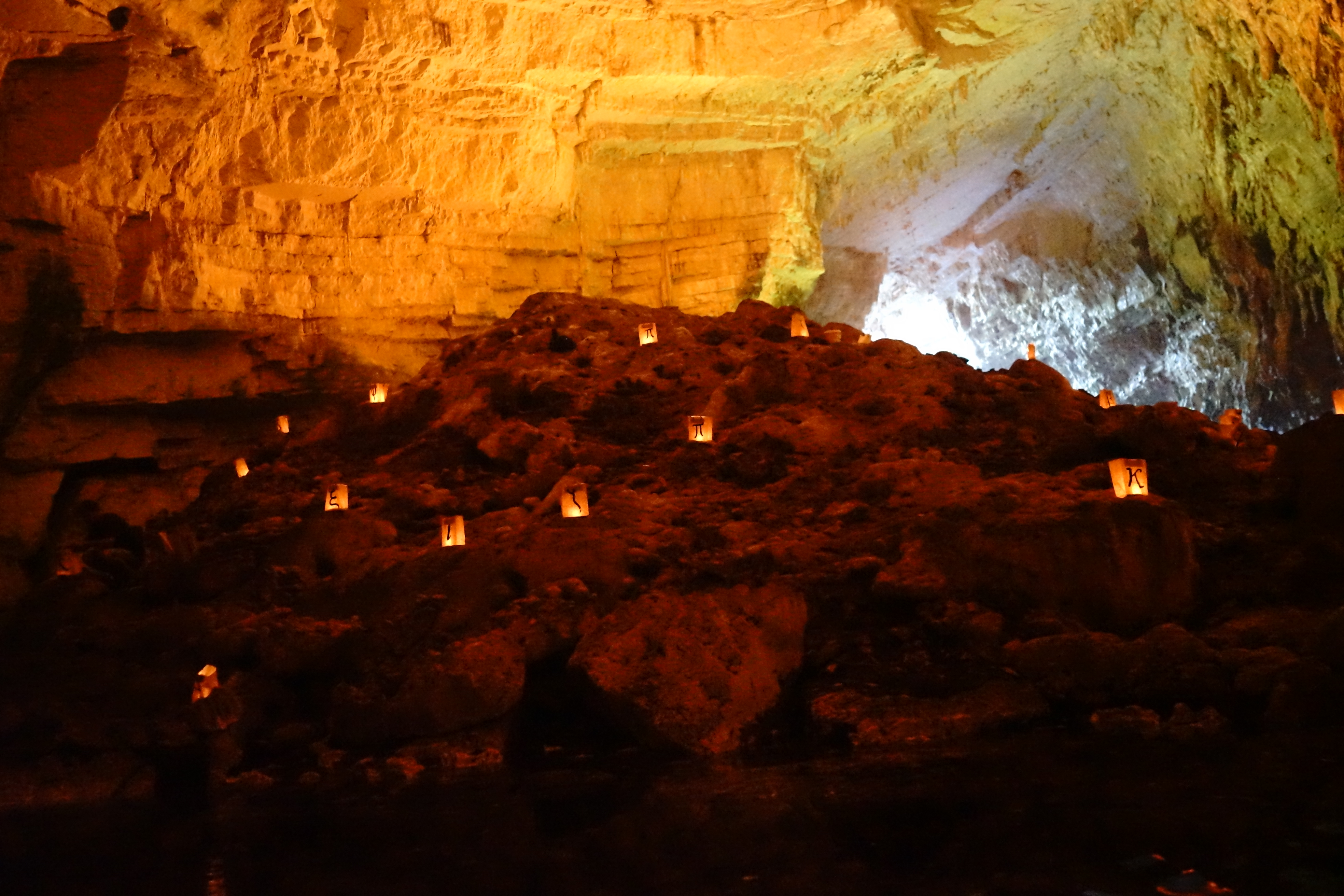 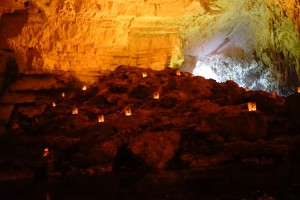 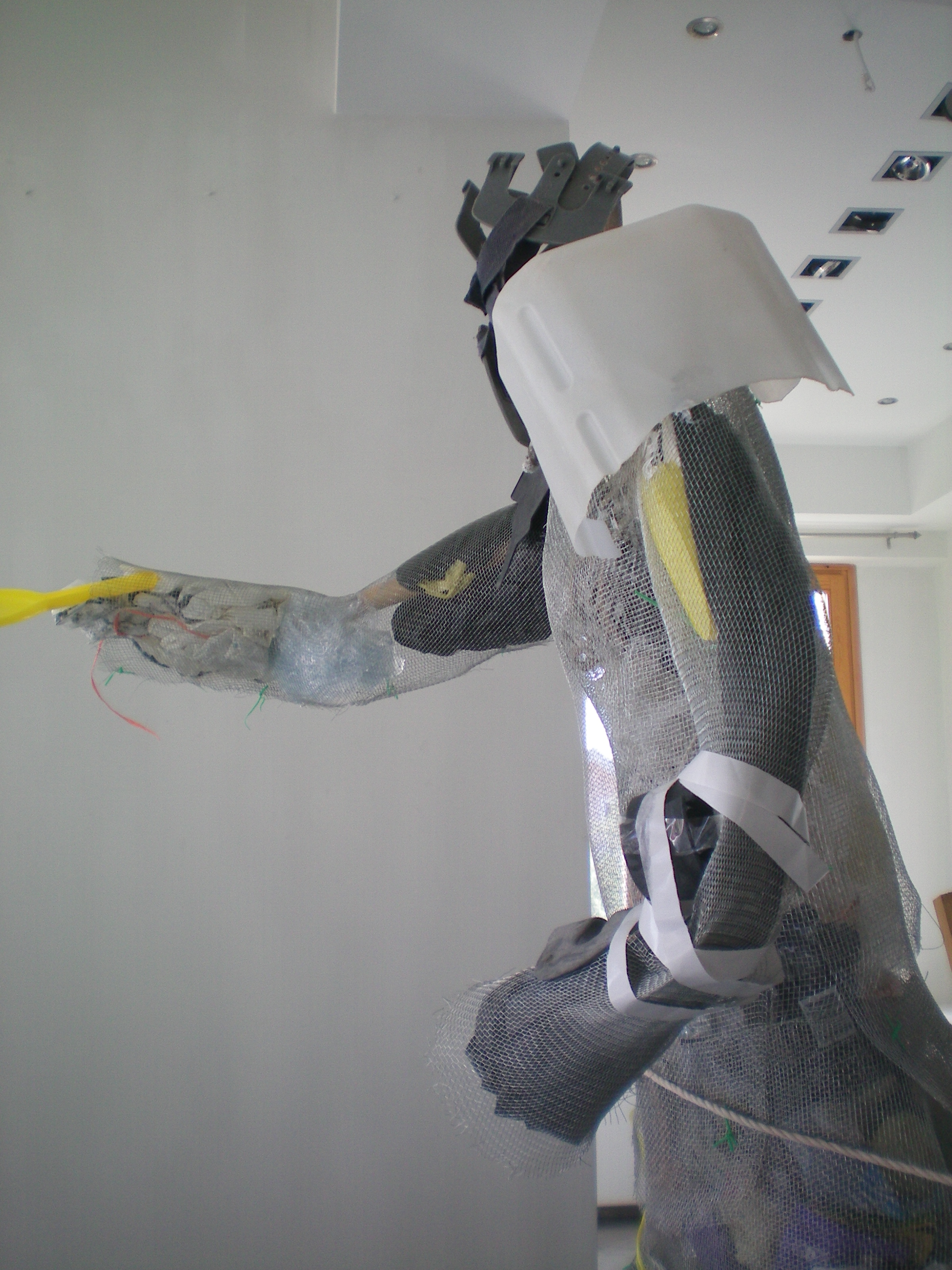 In this Interdisciplinary Design Lab, under the supervision of Dr. Mark Titmarsh, 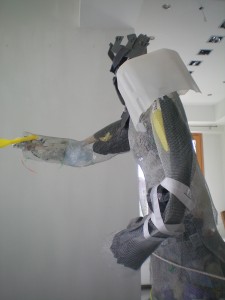 the discipline of design is cast as an agent for change, a way of creating and critically exploring possible futures for various contemporary urban environments. Centering on the island of Kefalonia, Greece, the lab will consider the future of the island with regard to the use and re-use of everyday plastic materials. This will involve investigating the island, its towns and locales, to recognise how it functions in terms of urban planning, public space, sustainability, architecture, tourism, sea sports and related design disciplines.

This studio project will begin as an exploration of plastic, the story of its creation and how it is has come to be ubiquitous in the design of daily practices. We will be looking at the use of plastic on the island for business and recreational purposes and noting in particular any dependence on the use of disposable plastics, from plastic bags through to coffee cups.

You are being asked to consider the cultural history of the island, its institutions and businesses, its domestic and recreational resources and any issues that might be generally applicable to other island states like Australia or Indonesia.

Your final goal on Kefalonia is to design a presentation for display in the gallery of the Ionian Centre. These works can take the form of creative installations that reflect consciousness of plastic usage, behavior steering towards ideal sustainability, and up-cycling for aesthetic practicalities, potentially creating a model for other islands and island states to emulate.

Working in a teams you will devise a component of the final exhibition that will take place on Friday 3 July 2015 at the Ionian Center for Arts and Culture. This work will be designed so as to integrate with the other interdisciplinary teams from American and Greek institutions to form a unique public event that indicates alternatives for existing plastic forms on Kefalonia.

All communication in Sydney will be initiated through UTS Online

Dr. Mark Titmarsh (born 1955, Ingham, Australia) is a visual artist working in painting, video and writing. His paintings and filmwork are currently held in public collections across Australia, and in private collections in Europe and the United States.

His current work executed under the rubric of ‘expanded painting’ is painting about painting or painting that dissimulates into objects, videos and texts. Recent work has included paintings on industrial materials, environments of fluorescent string and video works for mobile phones. In 2006 he was a cofounder of the artist run space, Loose Projects and is currently co-editing a book on the gallery.

In the 1990s he co-founded the Sydney based artists group Art Hotline that exhibited ephemeral works in non-gallery everyday sites. He also edited a book documenting their activities between 1992 and 1995. Much of this work could be described as post-painting objects in that they take the form of 3 dimensional constructions that refer specifically to the conceptual aspects of painting. His screen based work included video and experimental websites that were exhibited in Multimedia Arts Asia Pacific in 2000.

Mark is active in issues surrounding the arts, having been a co-founding member of WAAR (Working Artists Against Ralph) and PEAASS (Promoting Electoral Awareness of the Artist’s Status in Society), two groups that were formed to defend artists’ rights and raise awareness of their contribution to the national cultural environment. He was a co-founding member of Group 3 three, an artists’ collaboration exploring the boundaries of painterly practice through installation and photographic documentation.

In the 1980s he established an international reputation as an experimental filmmaker exhibiting in Europe, North America and South America winning awards at Ann Arbor and Montreal International Festivals. In Australia he was a significant contributor to the development of the postmodern debate in the visual arts in his role as co-editor of the visual arts magazine, On the Beach and as a new image painter.

Among other qualifications, Mark has just completed a PhD in Painting at University of Technology Sydney, he holds a Masters degree in Visual Arts and has studied at St. Martin’s College of Art, London; the University of London; the Pietro Vannucci School of Fine Arts, Italy and the University for Foreigners in Perugia, Italy. 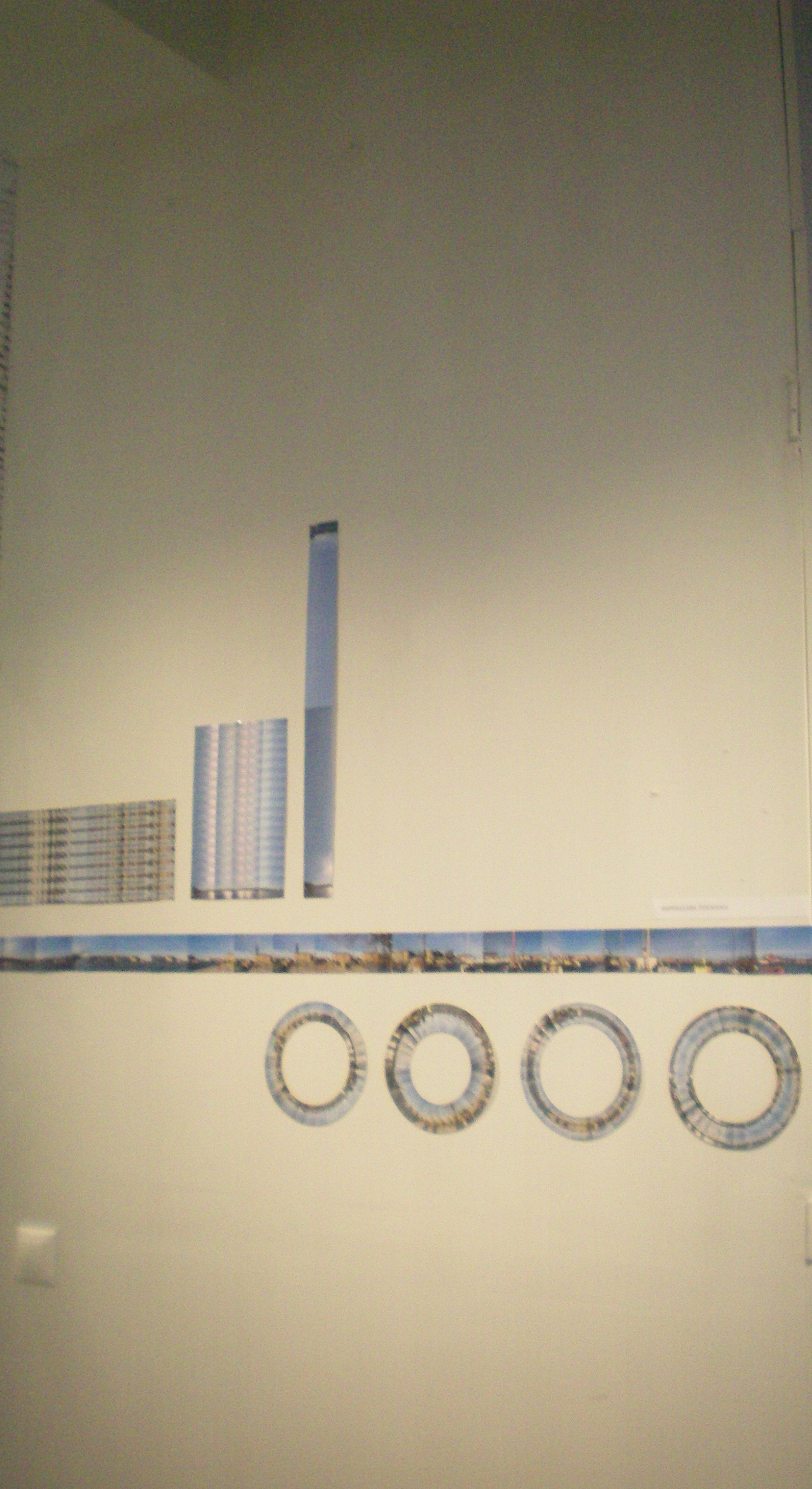 An exhibition built as a conceptual installation.
Horatio and Celeste are two fictive characters,
representing the works of Julia Heurling (Horatio) and Maria X Demas (Celeste).
The names derive from the concepts and meanings of “horizon” and “celestial” 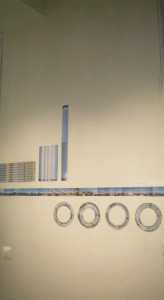 Designer Julia Heurling returns to the Ionion Center for Arts and Culture (ICAC)on a residency furthering her research on the project A HORIZON IS NOT FLAT. After a short term stay in Tokyo her direction took a slight turn, so, with fresh perspective and while reconsidering theoretical aspects of her work, she invites local artist Maria Demas to a creative dialogue in a defined space through applied art. The exhibiting hall at ICAC takes on the active part of a work of art leaving its passive quality behind, since the artists in a joint attempt engage with the space as a dimension, and as a circumstance by way of placing their work within it. The show’s duration is one day and a section of the installation will be open studio where visitors can see the work process.
Saturday, June 13th 2015, from 20:00.

TITLE_ ‘Celeste-Horatio: dialogue in a space.’

Julia Heurling
works as a designer and artist specialized in pattern and Textiles. She works within and in between the fields of interior design, product design, art and artistic research. She is educated at the Swedish School of Textiles, based in Stockholm, Sweden. Among her commissions are patterns for wallpaper, iPhone cases, calendars, textiles, and artistic decorations.
Her work “A horizon is not flat” was exhibited last year at The Ionion Center for the Arts and Culture, as a part of the “Mapping Kefalonia” program.

Maria Demas
Born in Athens 1977. Residence in the USA for 1 year, and 8 years University studies in the UK. Holder of B.A. in Illustration, and M.A. in Philosophy in relation to Art. Professionally active in a number of visual arts like storyboarding, graphic layouts, comics creation, hand-crafted shop signs, mural making, and teaching art workshops since 2002. Has taken part in art exhibitions in Portsmouth, Athens, and Cephalonia where she has been residing for the last 8 years.

THE IONION CENTER FOR THE ARTS AND CULTURE
PROUDLY ACCEPTS THE PROPOSAL OF
THE EMBASSY OF THE REPUBLIC OF INDONESIA IN ATHENS
TO PERFORM INDONESIAN BATIK WORKSHOP DURING JUNE 2015 .
ORGANIZER : Department of Information, Social and Culture, Embassy of Indonesia in Athens, in cooperation with Ionion Center for the Arts and Culture, Kefalonia, part of the 2015 International Art’s Program under the title :
<>
VENUE:The Ionion Center for the Arts and Culture, Greek Island Kefalonia.
ELIGIBILITY : Inviting participants from the islands Kefalonia /Ithaca and all over the World .
Acceptable individuals or groups, amateurs or experts, schools, students and artists.
Sessions will be organized in specified classes, based on the experience ,age, art experience requirements of the participants.
INSTRUCTORS : Professionals in the Art of Indonesian Batik- staff of the Indonesian Embassy in Athens.
THEME: Basic Batik Techniques: Theory and Practice.
TIME : JUNE 2015 (June 9th to June11th )
PROGRAM/ DETAILS: The program includes two parts:
1. introduction/ on screen presentation of the Indonesian Art of BATIK
2. practice.
Each day session will be a complete program including theory and practice.
Morning program 09.00 am – 13.00pm, Evening program 17.00 pm – 21.00
[Included coffee breaks ]
ENROLMENT TERMS AND CONDITIONS : application for participation
– by phone call at +30 26710 41126
– by email :info@ionionartscenter.gr,
– by web application at the web -address: http://goo.gl/forms/q2f8aD9uzk)
APPLICATION FEES: euro 10, to be fully offered to the Orphanage house of the Island Kefalonia. Schools participations are acceptable free of fee.
TUITION FEES : The workshop is kindly offered free of tuition fees to Kefalonia, Ithaca and the International Art’s Community by the Indonesian Embassy of the Republic of Indonesia in Athens.
MATERIAL AND EQUIPMENT : Kindly offered free by the Indonesian Embassy of the Republic of Indonesia in Athens
DEADLINES FOR APPLICATIONS: no deadline

Indonesian batik is a traditional handcrafted textile rich in intangible cultural values, passed down for generations in Java and elsewhere since the early 19th century, and more widely since the mid 1980s. Batik patterns and motifs process deep symbolism related to social status, local community, nature, history and cultural heritage.
In October 2009, UNESCO designated Indonesian batik as a Masterpiece of Oral and Intangible Heritage of Humanity.

Batik is made by applying dots and lines of hot wax to cloth using a copper pen-like instrument (canting tulis). The wax is later removed by boiling and/or scraping, repeating the process for each color. The entire process is carried out by hand, mostly as cottage industry.

Apply the wax over the penciled-in outline of the pattern. In general, the original cloth is white or beige.

After the cloth dry, the wax removed by boiling.

Organized by:
Department of Information, Social and Culture, Embassy of Indonesia in Athens, in cooperation with Ionion Center for the Arts and Culture, Kefalonia. 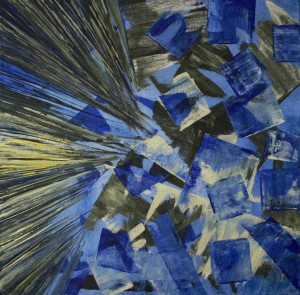 Exhibition  of drawings and paintings inspired from the island Kefalonia

//The Grecian Myth at the XX and XXI Century Art//

IONION CENTER FOR THE ARTS AND CULTURE 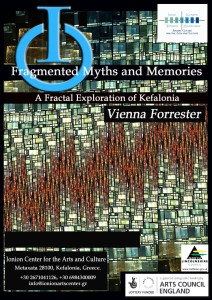