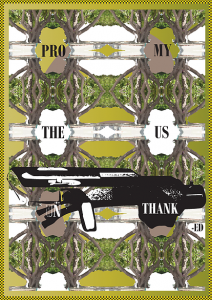 At the turn of an age the Titans lost the rule upon the cosmos to Zeus and his siblings. One of the titans, Promytheus, had tried to advise to his own kind that technology would earn them victory rather than honest might and power, but, they dismissed it as folly. So, Promytheus sided with Zeus and directed his offensive with techniques and innovative methods.
The new order had Zeus as leader and ruler and among his world reforms he would have human kind erased. Promytheus thought otherwise. He first gave man the advantage over the fear of death by giving them ‘blind hope’. Fire and her illumination were signifier gift that pertains to the collective of mechanical, structural, scientific, logical thought. He even instructed the most effective sacrificing rituals and methods so as to best appease the Gods. Zeus remained idle to the reinstatement of the human race -almost aloof- but, punishes Promytheus so rigourously as to make and example.
A syncretic approach to Next Nature is the disclosure of Promytheus and his advent in our turn of an age. In our passing into this, Next Nature. Yet, thanks is not given here; Promytheus remains unthanked.
A ficus on a square, his voluptous bark and branches, and a small boy perched up them. The reach of the image is both skyward, and rooted to the ground. The warning tape surrounding it hints to the toxicity of human arrogance. A turntable head a miniscule crossroads of art, science, and technology. Music, friction, electronic device. The syllables separated offer eclectic readings of the poster.